10 of the most beautiful places to visit in France

When most people think of France they think of fine wine and cuisine, exceptional scenery and a laid back lifestyle which is the envy of the rest of the world. The gorgeously diverse landscape – which has inspired centuries of influential writers, artists and poets – include huge mountain ranges, acres of green countryside and long stretches of sparkling coastline.Paris aside and in no particular order, here is our choice for ten of the most beautiful places to visit in France…

An area of outstanding natural beauty, the Loire Valley is also affectionately known as the garden of France. The valley spans over 280 km and is located in the beautiful middle stretch of the Loire River in central France. It’s filled with culturally and historically important architecture which has earned it a world heritage site status- so it’s not surprising it’s one of the most visited places in the country. Known for its large collection of fairytale-esque chateaux and mansions, exceptionally beautiful landscapes and one of the most striking rivers in Europe the Loire Valley is a gentle but most definitely bourgeois paradise. 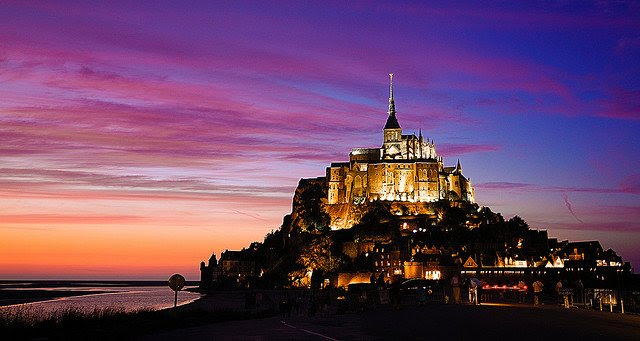 Second only to the Eiffel Tower as France’s best-loved landmark, Mont St-Michel is rocky, peaked island connected by a causeway to northwest France. It’s an imposing sight sitting amid sandbanks and powerful tides, the heritage site is most celebrated for its Gothic-style Benedictine abbey. Directly below the grand monastery is a medieval village complete with winding streets, small houses and souvenir shops. The island is accessible at all times except when the tide is very high.
If you’re visiting here you should also spend a few days exploring the rest of the Normandy region. Filled with history and lush green landscapes expect to see dry-stone farmhouses, chalk-white cliffs, half-timbered buildings and many other fine examples of picturesque architecture. The historically important site of the Normandy Landing beaches and the famous Bayeux tapestry is also located here. 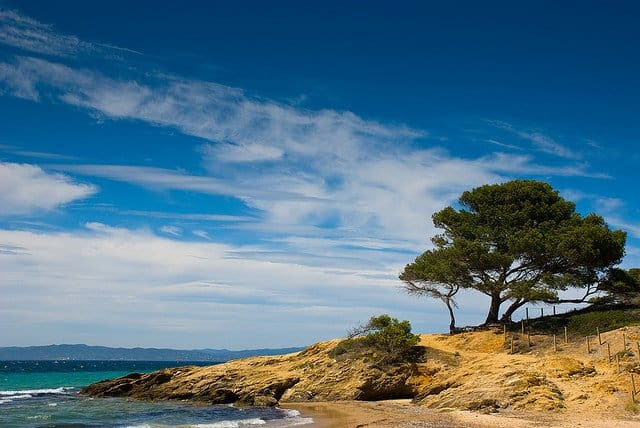 The Mediterranean coastline of southeast France is otherwise known as the French Riviera. Although expensive and over-developed to some, with its miles of gorgeous coastline and azure waters it’s still one of the most beautiful places to visit in France. The sun-drenched area has attracted and transfixed many visitors over the years including royalty, celebrities, writers and artists such as Pablo Picasso and Henri Matisse. The Côte d’Azur is also famed for its stylish coastal cities such as Nice, Cannes and St-Tropez, which still remain exclusive holiday resorts even today. 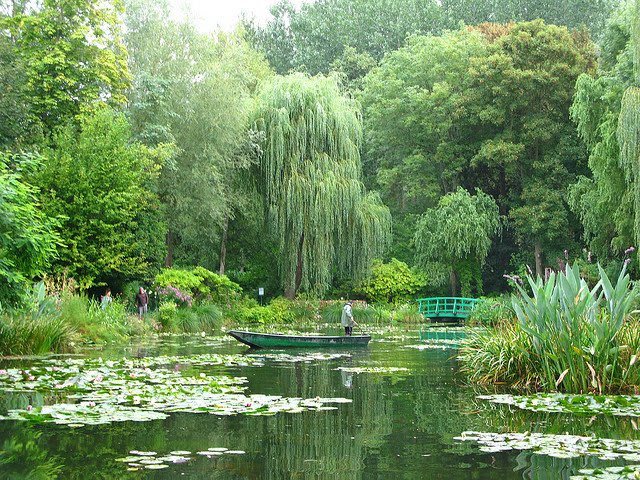 Giverny is a riverside rural idyll located on the borders of Normandy which is most famous for being the birthplace of impressionism. The small village was once Claude Monet’s cherished country retreat and now both his pink shutter-board house and photogenic country gardens are open to the public. Planted by Monet himself, the walled water garden (which inspired so many of his famous paintings) features white and purple wisterias, water lilies, weeping willows, bamboo and the iconic green Japanese bridge.

5. The Palace of Versailles

A wealthy suburb of Paris, Versailles is an important administrative centre and a proud tourist attraction in its own right. It’s most famous for its chateau – the hugely grand and ornate Palace of Versailles which once housed the kings of France (including the ill-fated Louis XVI and his wife Marie Antoinette). Both the perfectly preserved palace and manicured gardens are extraordinary and the palace, as well as being very easy-on-the-eye, offers an insight into the lives of 18th century French royalty before the start of the legendary French Revolution. 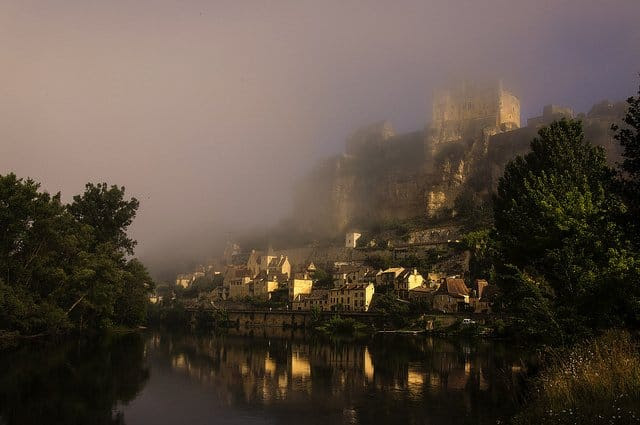 The Dordogne which lies to the south west of the country is an exceptionally beautiful region which is unlikely to disappoint even the most discerning of travellers. Its roads and rivers wind through lush, unspoiled agricultural pastures and spectacular prehistoric landscapes of caves and gorges, interspersed with charming medieval towns and villages of rich historical heritage. Make sure you visit the sacred pilgrim’s monuments en route to Santiago de Compostela, sample the local wines still produced by many of the chateaux and explore the ancient fortified towns such as the visually striking Beynac-et-Cazenac. 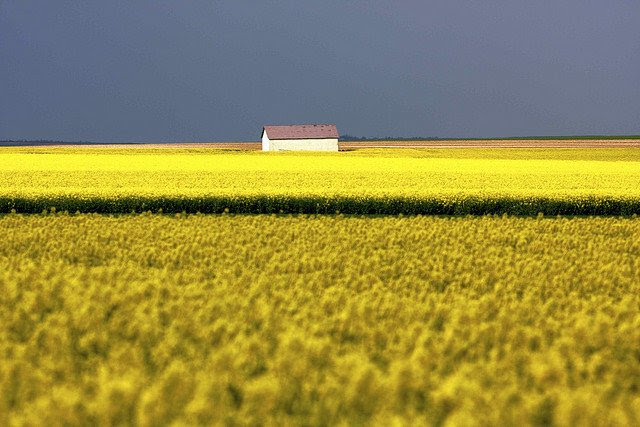 The birthplace of champagne is also one of the most beautiful regions in France and not surprisingly it’s very popular with wine trail tourists. Champagne-Ardenne can be found in the northeast of the country, bordering Belgium and in addition to the miles of Champagne Routes, the region has plenty of scenic countryside, medieval chateaux and vineyards as far as the eye can see. Make sure you visit the region’s capital Troyes for impressive art and architecture and Reims for its famous cathedral and acres of underground wine cellars. 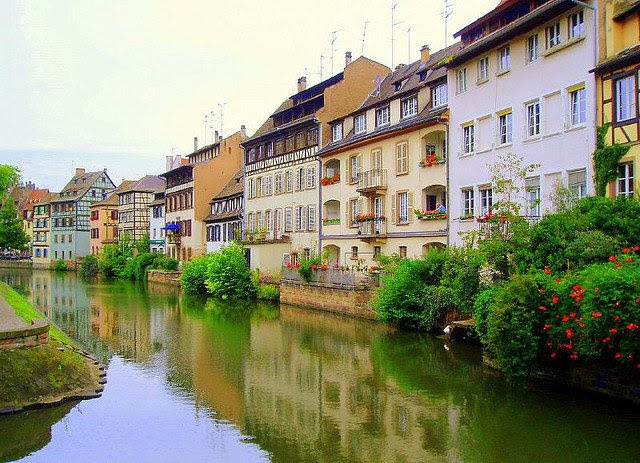 Located right on the border of Germany and France this heritage city has characteristics of both countries. It’s a picturesque – almost twee – town which really draws the visitors with its old world charm. Famous for its riverfront half-timbered houses, gothic cathedral and obvious fondness for flowers, it also makes a great base for those wishing to visit the nearby Black Forest or the River Rhine.

The Provence countryside definitely deserves a mention of its own. If you head for the Luberon area, located at the heart of the region, you’ll find the most archetypal scenery of rural Provence – beautiful landscapes filled with endless lavender fields, lush olive groves, undulating vineyards and pretty ancient hilltop villages filled with shutter-board houses. Make sure you also include trips to the picturesque villages of Baux-de-Provence and St. Rémy and the dazzling walled city of Avignon. Long lazy days and alfresco lunches await you in this rural chic paradise. The French Alps are probably best known for their up-market ski resorts, but the region is also home to some very attractive towns which are great to visit, summer or winter. One that really stands out is Annecy which is also known as the ‘Venice of Savoie.’ The city is built around a 14th century Chateau and the whole town is interspersed with small canals. With its unusual centre and backdrop of snowy mountains, Annecy is easily one of the most photogenic towns in France.
Of course it’s impossible to mention all the beautiful places in France in a Top 10 list. Still want more? Then also pay a visit to the tranquil and unspoiled countryside of the wine regionBurgundy, the chic coastal cities and sun-soaked shores of Corsica, the world heritage cities of Lyon and Bordeaux, the picturesque villages and high mountains of the Mid Pyrenees, the low-key traditional wine region of Languedoc and the Gorge du Verdon, France’s answer to the Grand Canyon. Enjoy your stay in this beautiful country!
Posted by sir_khai79 at 1:19 AM