Birds are the only animals with feathers. All have feathers and most birds can fly. It is the possession f feathers, not the ability to fly, that distinguishes birds from other animals. There are about 10,000 species of birds from all over the world. Here are 20 of the world's most colorful birds. 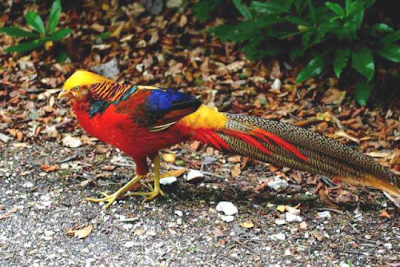 The golden pheasant of Asia is a brilliantly colored game bird. It is native to forests in mountainous areas of western China but feral populations have been established in the United Kingdom and elsewhere. 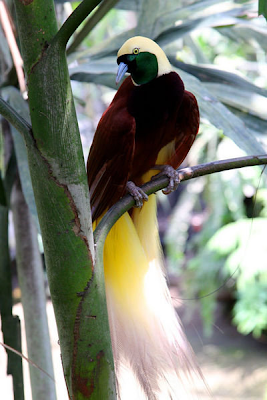 The greater bird of paradise found in New Guinea has elongated flank feathers that form ornamental plumes. Bird of Paradise is a tropical bird known for the brilliant plumage of the male. They live mostly in New Guinea and neighboring islands. The brilliantly colored feathers of the male were once widely sought as decorations for women's hat. 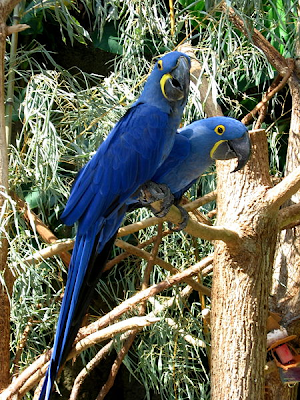 
Hyacinth Macaws are native to central and eastern South America. It is the largest macaw and the largest flying parrot species in the world, though the flightless Kakapo of New Zealand can outweigh it at up to 3.5kg. In terms of length it is larger than any other species of parrot. Their popularity as pets has taken a heavy toll on their population in the wild. Birds in captivity fetch a price of around $9,000-$12,000 US. 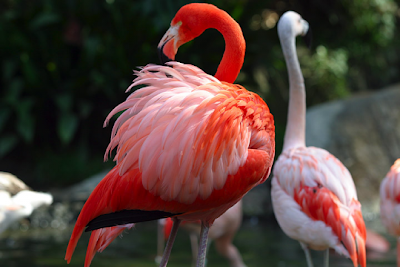 
Flamingos are found in both the Western Hemisphere and Eastern Hemisphere. Flamingos frequently stand on one leg. The reason for this behavior is not fully known. Flamingo tongues were considered a delicacy in Ancient Rome. Also, Andean miners have killed flamingos for their fat, believed to be a cure for tuberculosis 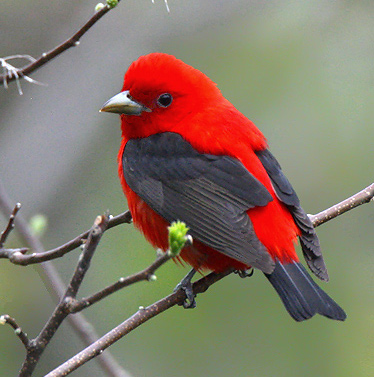 
The scarlet tanager is a medium-sized American songbird. Adult males are bright red with black wings and tail; females are yellowish on the underpants and olive on top, with olive-brown wings and tail. 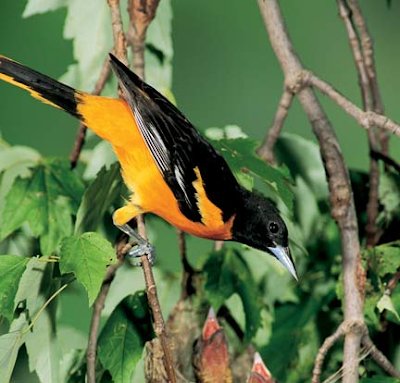 
Northern oriole is formerly known as Baltimore oriole in the east and Bullock's oriole in the west. This is a small icterid blackbird which is 18 cm long and weighs 34 g. It is one of the brightest local birds and has a voice to match its distinctive plumage. 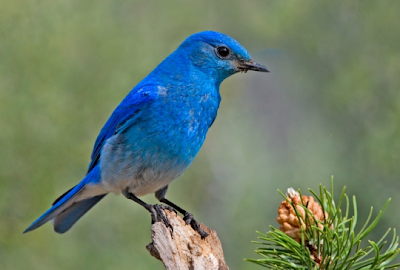 
The bluebirds are medium-sized, mostly insectivorous or omnivorous birds in the genus Sialia of the thrush family Turdidae. These are attractive birds with blue, or blue and red, plumage. Female birds are less brightly colored than males. 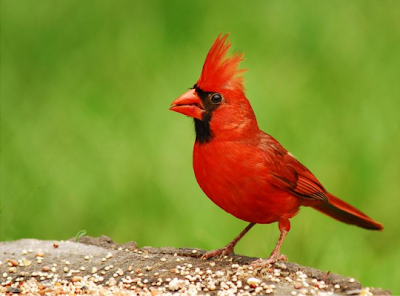 
The northern cardinal is also known as the Redbird and the Virginia nightingale. The Northern Cardinal is a mid-sized songbird with a body length of 21-23 cm (8.3 to 9 inches). It has a distinctive crest on the head and a mask on the face which is black in the male and gray in the female. 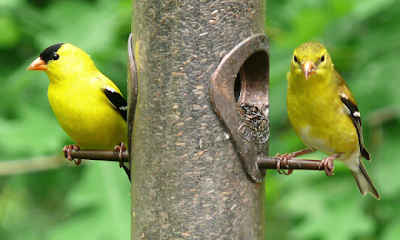 
The American goldfinch is also known as the Eastern Goldfinch and Wild Canary. The male displays brightly colored plumage during the breeding season to attract a mate. The courtship rituals of the American Goldfinch include aerial maneuvers and singing by males.


The Wood Duck or Carolina Duck is a medium-sized perching duck. A typical adult is about 19 inches in length with an average wingspan of 29 inches. The adult male has distinctive multi-colored iridescent plumage and red eyes. The female, less colorful, has a white eye-ring and a whitish throat. 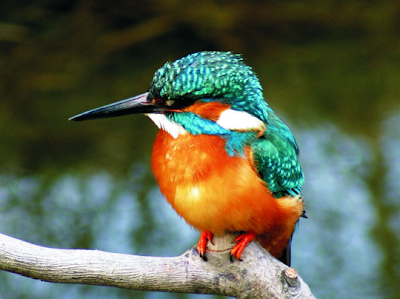 
There are about 90 species of kingfisher. All have large heads, long, sharp, pointed bills, short legs, and stubby tails. They are found throughout the world. 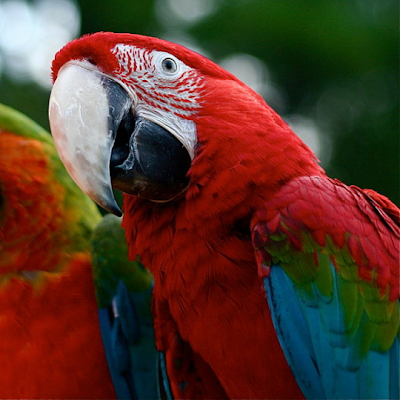 
The superficially similar Scarlet Macaw has no eye lines and a yellow bar on each wing. Some macaw owners and experts call the Green-winged Macaw the 'gentle giant', as it is larger in size than the Scarlet Macaw and Blue-and-yellow Macaw, but have a more docile, sweet nature which often makes it a more desirable pet or companion parrot. 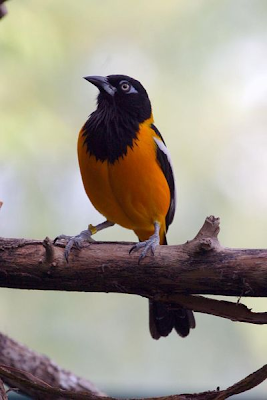 
Troupial or trupial is the national bird of Venezuela. The Troupial is fairly large in size, with a long tail and a bulky bill. It has a black head and upper breast. Troupials are obligate nest pirates, meaning they make no nest of their own, and are thus required to steal or occupy a vacant nest in order to survive. Troupials are capable of violent attacks against native nesters, and once they possess these territories they defend them fiercely against intruders. They may even ingest the eggs or young hatchlings of a newly acquired nest. 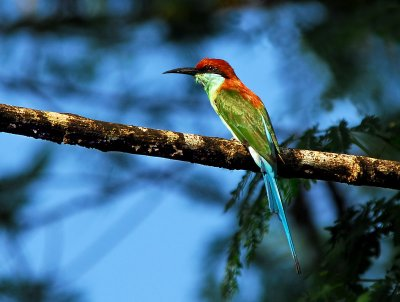 
The bee-eaters are a group of near passerine birds in the family Meropidae. They are characterized by richly colored plumage, slender bodies and usually elongated central tail feathers. It is a species of bird in the Meropidae family. It is found in Hong Kong, Taiwan, China and countries in Southeast Asia. 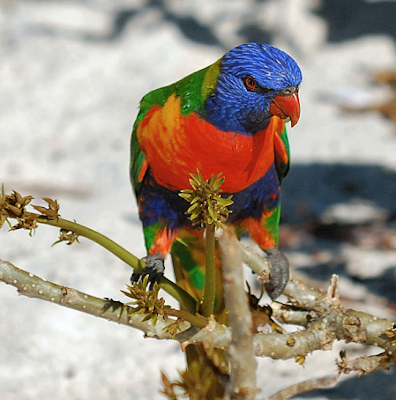 
The Rainbow Lorikeet is very colorful as its name suggests. Almost every color of the rainbow is found on the feathers of the rainbow lorikeet. Captive lorikeets have a long lifespan, often in excess of 20 years. 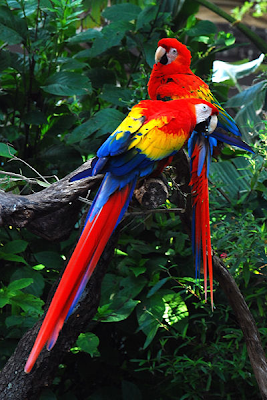 
The Scarlet Macaw is a large, colorful parrot. It is native to humid evergreen forests in the American tropics, from extreme eastern Mexico locally to Amazonian Peru and Brazil. It's the national bird of Honduras. 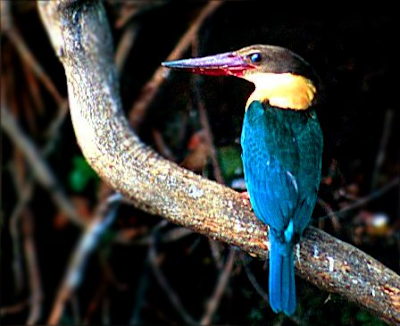 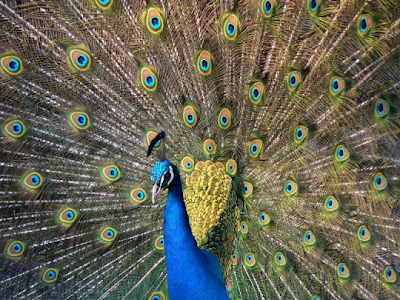 
Peafowl, a large bird of the pheasant family, is among the most colorful of birds. Asian peacocks have long been domesticated. The males are noted for their display of brilliant plumage. To attract attention, during courtship and at other times, the male lifts the train and spreads it out in a fan that arches over the bird's back and touches the ground on either side.
Posted by sir_khai79 at 12:57 PM